Around 30,000 people enjoyed the weather and entertainment at last weekend’s Southside Festival held in the Queen’s Park Recreation Grounds.

The weekend’s festivities kicked off with a procession at 11am, led out by the St Francis Pipe Band.  The parade, which included members of the local community and a series of vintage buses, started from Newlandsfield Road, then proceeded down Kilmarnock and Pollokshaws Road, Allison Street, Victoria Road and Queen’s Drive before ending at the Queen’s Park Recreation Grounds where a series of bands entertained crowds into the evening.  A Picnic in the Park was held in the Recreation Grounds on Sunday 27 May.

Andrew Montgomery, a member of the Southside Festival steering group, was thrilled with the turnout.  He said:-  “At the recreation grounds on Saturday we attracted 25,000 people, which is the largest festival we’ve had by a long shot.  Our previous best was 15,000 back in 2010.   This year, the police estimate was in excess of 25,000 on Saturday and on Sunday was in the region of 4 – 5000.”

“So in the course of the weekend we’ve attracted 30,000 people and the fantastic thing was every part of the community was represented.  There was a great spectrum of people, no doubt buoyed on by the fantastic weather that we had.  It was absolutely glorious.”

Montgomery highlighted the work of those involved.  He said the weekend was: “incredibly successful and to think that it was produced entirely by 10 volunteers with a budget of £30,000; incredible, absolutely incredible.” 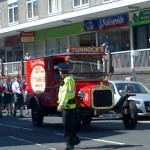 A free bus service made up of vintage buses that were part of the procession ran on the Saturday from George Square to the Queen’s Park Recreation Grounds as well as serving the Southside with the free Southside Circular which ran between Pollokshaws, Pollokshields, Shawlands and the Recreation Grounds.

Members of the steering group will meet with the Council’s Licensing Authority in the next couple of weeks for a formal debriefing before they consider planning for next year’s festival.